A note from Grammie to Kevin- Thank you for sending Flat Stanley here to spend some time with us! We had a lot of fun and everyone who met Flat Stanley was very impressed with his story about traveling all over the world.

I had a great time taking him with me wherever I went and taking his picture in all kinds of different places. Some people thought it was strange that an (old) lady would be going around with a 'paper doll' but we had fun doing this!

Well, I'm on my way back home! Your Grammie waited to put me in the envelope so I wouldn't have a long time in the dark. Rats, maybe I should have asked for a flashlight! Then I could read the journal your Grammie wrote.

Oh well, too late now. I have my sweater on because I know it's cold at your house.

We went out for a walk to day and your Grammie and Grandpa stopped at a store in town that makes a really, really yummy snack. They bought enough snacks for your whole class. Your Grammie is going to mail them in a separate box because they might take a little while to arrive.

OK, here I am getting ready to go to the post office. See you soon! 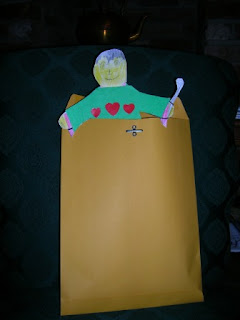 Your Grammie says it's time for me to head home to NY! I've had a good time here with your Grammie and Grandpa Rock, helping out at their bed and breakfast. It will be fun to come home again, too.

I think I'm going to be a little bit late. Your Grammie was just looking at the the note Mrs Taylor sent and I am supposed to be back home on Monday, but I'm still here in Maine.

I hope it's ok if I'm a little late. I'll try to be back before you go home for Thanksgiving. I sure want to be there for your mom's turkey and your world famous applesauce!

Thanks for sending me here, I had a really good time!

We're back from vacation. No moose. We didn't see any moose anywhere. Maybe because it is hunting season here and all the moose are hiding. I did see a loon on Moosehead Lake but that was all.

I only have another week here at your Grammie's house so I'm going to try to find some other Maine things to do so you can show your friends what Maine is like.

We've been very busy here so I haven't had a chance to write. We're going to look for moose today! If we see any, I'll try to get a picture. Moose don't usually hang around near your Grammie's house so we have to go for a drive toward the mountains and the lakes to see if we can find any.

The place we are driving to is called Moosehead Lake. That sounds like a good place to look!

Off to the beach! 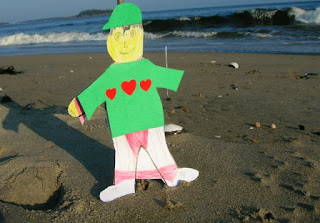 We went to the beach! It was really warm here, even though I heard you had snow! No snow here, yet.

Your Grammie and Grandpa Rock like to go to this beach a lot in the winter. They only go in the winter because dogs are not allowed on the beach between April 1st and October 31st so they would have to leave Bre at home and she loves the beach, too!

Your Grammie says this beach has changed a LOT since they were here in March. The river that feeds out into the Atlantic Ocean here, the Morse River, has altered its courses slightly cutting off the beach from the Fox Islands which are in the bay. Your Grammie says she used to be able to walk to the islands at low tide, but no longer. 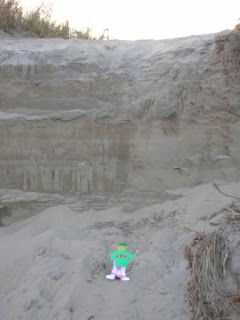 There is a lot of erosion on this beach now. Right behind where I am standing on this hill you can see where the edge of the dunes are above my head. THAT is where your Grammie says they used to get onto the beach! Now it is 10 feet over my head.

When the river changed its course, it started to come much closer to this shore line than in the past. The dunes are eroded and it has changed the shape of the beach.

Beach erosion can mean the loss of habitats for the birds who nest here. During the nesting seasons for the piping plover and the least tern, it is very important to stay away from the nests and to keep pets away as well. That is one reason why dogs are not allowed on the beach after March 31st.


We went looking for shells along the beach. The shells here are fairly small. You don't usually find shells larger than 2-3". The ones I picked up are very small. Sometimes you can find sand dollars but they are very small, too. The one I found was tiny! This is not really a good beach to find beach glass and we didn't find any at all.

Just up the road from here is Fort Popham. The fort was originally built for the Civil War. It was used during the Spanish-American War and WWI but was never completely finished. We didn't go there to see it as it was getting dark.

Popham Beach is in the town of Phippsburg. It was the site of the first attempted English colony in New England. The first big ship built in this country (before it was the United States!) was built here between 1607-1608. It was called 'Virginia of Sagadahoc'. "Sagadahoc" is a Sasanoa Indian word which means 'mouth of the big river'. 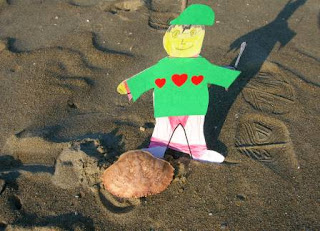 I just have a couple of other pictures to show you of our day at the beach. In this one, I have found a big crab shell. I don't know what kind of crab it is, maybe you can find out!

I'm glad it was just the shell, this one could have eaten my sneaker! Ouch!

Grammie thought it might be a Queen crab, but she wasn't sure. Maybe you have a book in your classroom that shows pictures of crabs and crab shells and you can figure it out.

The last picture is of me and Bre. Bre loves to go to the beach! It was very hard to get her to sit still to take the picture. 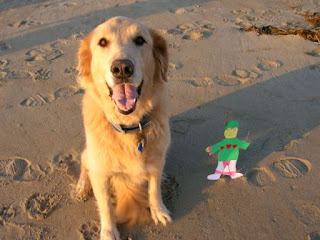 Open wide...off to the dentist! 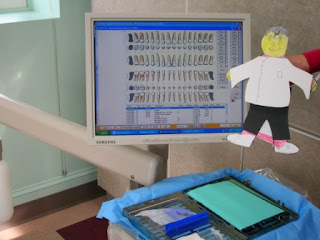 We went to the dentist today! Your Grammie made me a dentist outfit to wear! You can see me here in the picture near the tray of dental instruments the hygenist uses to clean teeth. (There is a cover over the instruments to keep them clean until the hygenist is ready to use them.) On the computer monitor is a diagram of the different teeth I have. Do you know how many teeth a human being has? Many people never get their 'wisdom' teeth so most people only have 28 teeth. If you have your wisdom teeth, you can have up to 32 teeth. Wisdom teeth come in when you're a teenager, usually when you're about to graduate high school or go to college.

Everyone in your class has probably lost most of their baby teeth and now have their adult teeth. BUT, you get the big, grinding teeth in the back (your second molars) when you're around 12-13 years old.

I have my xrays and will bring them back with me when I go back to NY. You can show them to everyone! Tina gave me a toothbrush, too, so I can keep my teeth clean while I'm at your Grammie's house. She gave me dental floss, too. It's very important to floss your teeth to get the stuff out that gets stuck in there. Flossing your teeth makes your gums healthy which keeps your teeth healthy. (Don't forget to brush your teeth, too!)

Here's a picture of me in the chair waiting to have my teeth checked. 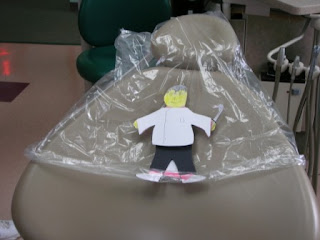 Flat Stanley
My name is Stanley Lambchop. The reason I am flat is because my bulletin board fell on me and squished me. It's not so bad, I fit into an envelope now and can travel all over the world.

Here are some of the recipes from White Cedar Inn, where I'm staying:

Preheat oven to 350 degrees. Mix all the ingredients together in a bowl. Drop batter by the tablespoon onto cookie sheet. If you used the chunky peanut butter, leave extra room, they spread out a LOT. You can get 16 cookies on a big cookie sheet if you use the creamy peanut butter. Press the tines of a fork into the top of each cookie to flatten them a little.

Bake for 10-12 minutes depending on how hot your oven gets.

Extra special: Don't use the fork to flatten the cookies but, instead, press a Hershey Kiss into the top AFTER they come out of the oven. Careful, the cookie sheet is HOT!

This is a good recipe for a chilly morning. It's a great way to use up fruit that is slightly past prime!

You can make this the night before and cook in the morning.

Bake for 45 minutes, until bubbly. You can cover with tin foil for the first 30 minutes to retain moisture, then uncover for last 15 minutes.

If you use a smaller baking dish, put a cookie sheet under the dish so it doesn't bubble over onto the oven.

Scoop out with a big spoon into a dessert bowl and put whipped cream on top for a special treat.